The Restoration of the Lily Pool

17 Aug The Restoration of the Lily Pool

If you’ve been reading our blog series on the Lily Pool, you’ll recall that Caldwell’s original design of the Lily Pool lasted less than a decade before becoming the Lincoln Park Zoo’s bird habitat. While the site served a useful purpose and even hosted concerts, it no longer reflected Caldwell’s vision of a glimpse at the ancient Midwestern landscape. Twenty years ago, the Lincoln Park Conservancy worked with the Chicago Park District to restore the Alfred Caldwell Lily Pool in line with Caldwell’s original plan. 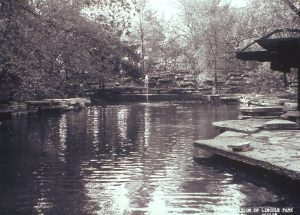 This was not the first time the Lily Pool had been restored. In the mid 1960’s the Chicago Park District addressed erosion problems and enhanced the overall appearance of the site by adding additional stones, split rail fences, and a shed. This version of the Lily Pool is remembered by many long-time residents of the City as the “Rookery.”

In 1997, the Friends of Lincoln Park (later renamed the Lincoln Park Conservancy) worked with the Chicago Park District, local birders, ADA advocates, historic preservation proponents, nearby residents, other small non-profits, and general park users to develop a plan for the restoration that met a variety of uses and needs. This renovation removed the features added in the 1960s–including the piped-in music–reopened the eastern path, and replanted native species using Caldwell’s original planting plan.

Infrastructure restoration work focused on the stone and wooden features including the waterfall, council ring, birdbath/drinking fountain, and the pavilion. All together about 1,600 stones were removed and reset and both north and south parts of the pavilion rebuilt. The original workmen had done an amazing job fitting the paving stones together, but many of them had shifted over time. To ensure accuracy in the finished restoration, the edges of each stone were carefully photographed before it was removed and then set back exactly according to the original design. 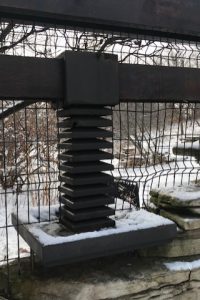 During the restoration a few changes were made. Features that Caldwell had included in his original plan but had never implemented, such as the lantern near the Fullerton Gate and a roof on the pavilion, were added.

After completion of the restoration, the Chicago Park District officially renamed the Lily Pool in honor of Alfred Caldwell, designer of this much-loved refuge from the City. The restoration earned the site national and Chicago historic landmark status. Today, the Conservancy maintains the Lily Pool in honor of Caldwell’s vision and for the enjoyment of Park visitors. We offer wildflower walks of the site monthly during the season, and knowledgeable docents are onsite during summer weekends to talk with visitors about the plants, animals, and landscape architecture of Lily Pool. To celebrate the 20th anniversary of the restoration of the Lily Pool this fall, we are excited to work with the Chicago Architecture Foundation to offer tours of the site during Open House Chicago, October 16-17th. We hope you will join us! 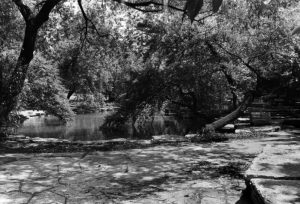 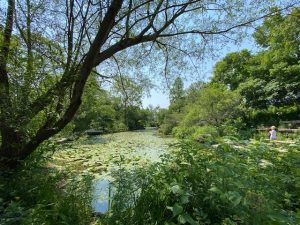