Plants in the Lily Pool

23 Sep Plants in the Lily Pool 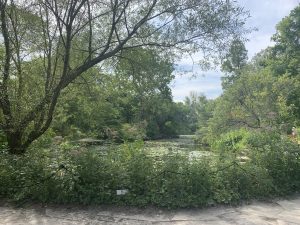 September is a transition month in the Lily Pool. As the end of summer approaches, the plants put forth a final effort to bloom, set seed, and prepare for the winter.

Well versed in native plants, Alfred Caldwell chose a wide range of trees, shrubs, perennials and water plants to provide beauty and interest through the seasons and at various heights from low to the ground to overhead. In fact, Caldwell felt so strongly that the Lily Pool needed to reflect the region’s native plant life, that he sold his life insurance policy to purchase plants for the site! While sometimes called a prairie or a woodland, Caldwell actually created a savanna habitat in the Lily Pool. Savanna environments include both prairie and woodland plants; thus, open fields of grasses and wildflowers with scattered clumps of trees greet every visitor who walks into the Lily Pool. 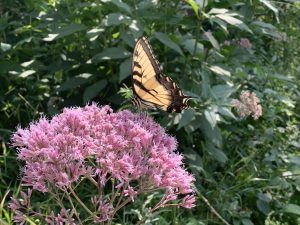 Native plants have several advantages over non-native plants, both in the Lily Pool and elsewhere. These plants are generally well adapted to the climate of a region, and thus able to survive and thrive during normal variations in temperature, rain/drought cycles, and other seasonal changes. Consequently, they generally need less fertilizers or pesticides because they evolved alongside native animals, including insects and can attract these native predators to keep pests at bay. Native plants also attract other native animals, particularly birds and small mammals, who use the seeds as food and then help deposit the seeds elsewhere to help the plants reproduce.

One prevalent native that thrives in the Lily Pool is Joe Pye weed (Eutrochium purpureum). Caldwell included this tall and storied plant in his original plant list, and similar to the Council Ring feature, Joe Pye Weed harkens back to Native American history and traditions. Historically, Joe Pye was a Native American healer who used this plant to brew a cure for typhoid fever, and halted an epidemic in Colonial Massachusetts. Consequently, the plant was named in his honor. Often reaching heights of 4 to 7 feet (and sometimes taller) Joe Pye Weed’s delicate purplish flowers attract and nourish butterflies and bees through late summer and into fall. Late in the year, the arching, architectural seed heads provide both visual interest to visitors and food for small animals during colder months. Caldwell’s inclusion of Joe Pye Weed (and its reintroduction during the restoration) demonstrates his intention as a landscape architect. He used native plants that were well suited to the environment, that bloomed and fruited through the seasons providing visual interest throughout the year and in a variety of visual planes. 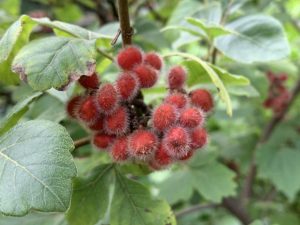 Another Lily Pool plant–often overlooked–is the fragrant sumac (Rhus aromatica). You can find this shrub on the southern end of the East path. As we move into the fall, this shrub from Caldwell’s original planting list begins to really shine! Its leaves turn to rich reds, oranges, yellows, and purples. The fuzzy red berries provide food for a variety of small animals and birds through the winter. Next spring, the yellow clusters and catkins of flowers will provide nectar to early butterflies and bees. In addition to its visual interest, fragrant sumac also appeals to our sense of smell. It gets its name from the aroma released when the leaves and branches are crushed and broken.

Conservancy staff sometimes hear that the Lily Pool would be very pretty if we weeded it. While it may look overgrown compared to the ornamental gardens in front of the Conservatory, it is in fact well cared for by Conservatory staff and volunteers who work hard to remove invasive species and maintain the natural look of the Lily Pool. In this state, it is a safe haven, not only for the people of Chicago, but for its native plants and animals, too.

To learn more about Caldwell and his vision, and how the native plants in the Lily Pool support us all, join us on a wildflower walk monthly from April to October. You can purchase tickets on Eventbrite. 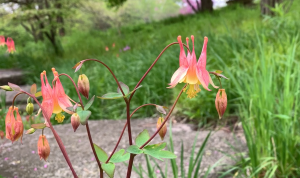 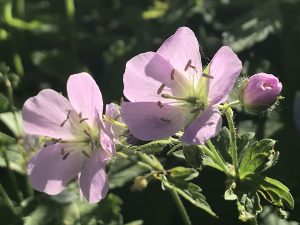 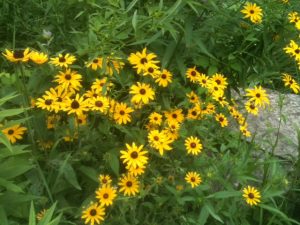 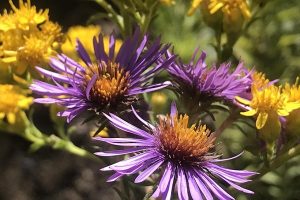