The Animals of the Lily Pool

17 Aug The Animals of the Lily Pool 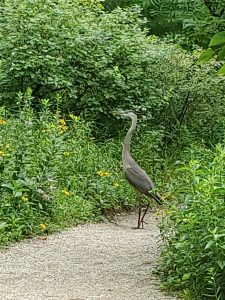 The Alfred Caldwell Lily Pool is an oasis, a refuge from the concrete city, both for the people of Chicago and for the animals that call it home.

Every year in the spring and the fall, hundreds of migratory birds make their way along the shore of Lake Michigan on their way north or south. Many of those birds will stop, either temporarily or for a breeding season, at the Alfred Caldwell Lily Pool. Part of what makes the Pool so attractive to birds and other animals is the abundance of native and flowering plants; while lawn grasses do attract some species of birds (American Robins, Killdeers, and Canada Geese), most birds prefer habitats where either the plants themselves, or animals living in the plants, provide food. 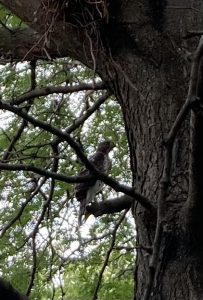 This summer, Lily Pool visitors had the opportunity to observe a family of Cooper’s Hawks. The parents raised four children who spent their adolescence basking at the south end of the Lily Pool and in the Conservatory parking lot. In addition to the hawks, visitors regularly took pleasure in observing the various ducks and herons that summer at the Lily Pool. Next time you visit, keep an eye out for the Wood Ducks, Mallards, Green Herons, Great Blue Herons, and Black Crowned Night Herons, all of which find refuge by the Pool’s calm water.

Birds aren’t the only kind of animal living at the Lily Pool through the summer. Every year turtles, dragonflies, damselflies, and frogs live, at least part of the time, in the pond. Look for emerging dragonflies where you see plants rising out of the water, and frogs sitting on the lily pads in the height of summer. Squirrels, chipmunks, rabbits, and the occasional fox or coyote represent the mammal population of Lincoln Park. If you sit still for a while, you may find yourself sharing the view with a chipmunk stuffing its cheeks with fruits from the trees.

In the fall, as the birds migrate through Chicago, hundreds of species not seen during the summer months rest and replenish in the Lily Pool. They shelter in the branches of the trees and eat the seeds and berries off the native plants that surround the pool itself. Natural areas like the Lily Pool are essential food and rest stops for birds flying hundreds or sometimes thousands of miles to their southern habitats.

Because of the diversity of native life in the Lily Pool, we encourage visitors to leave their pets at home. Dogs, however well behaved, can disrupt the native animals. Next time you visit, speak with a knowledgeable Conservancy docent to learn more about the wildlife of the Lily Pool. 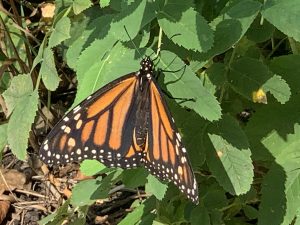 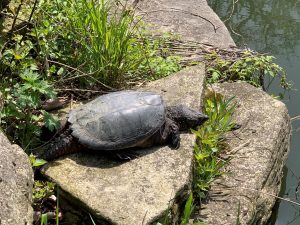 Turtle sunning by the pond in the spring