A Brief History of Chocolate

21 Jul A Brief History of Chocolate 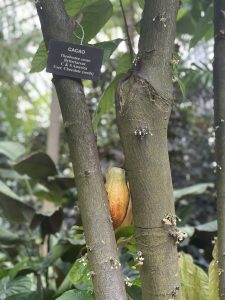 Chocolate is derived from cacao seeds which are found in pods like this one (Theobroma Cacao) in the Conservatory’s Palm Room. Not only does it taste delicious, but chocolate has a rich cultural history as well! Native to central and South America, the story of today’s favorite sweet treat began over 2000 years ago with the Mayans. The Mayans combined cocoa seeds with water and chile peppers, among other ingredients, to produce a spicy chocolate drink. The use of cocoa seeds spread to other Mesoamerican cultures like the Aztecs through trade. Both the Mayans and Aztecs revered cocoa and used the seeds as currency! In Aztec culture, drinks made from cocoa were held in such high regard that they were often given as offerings and used during religious ceremonies.

When the conquistadors invaded Mexico in the 1500s, they began shipping the cacao seeds back to Spain where the chocolate drink became a status symbol. The Spanish began adding sugar to the cocoa and eventually Sweetened Chocolate became a symbol of wealth across Europe; so much so that, in France, only members of the royal court were allowed to consume it. Even the Catholic Church recognized it as an useful drink and permitted people to drink it during times of fasting.

Europeans continued to adjust the recipe for drinking chocolate, adding milk and other ingredients during the 1600s. In 1657 the very first “chocolate house” opened for business in London. The Industrial Revolution made chocolate available to the masses and in 1847 the first candy bar was created by J.S. Fry and Sons of Britain. Milk chocolate was invented not long after with the help of Henri Nestlé, and was capitalized on by Milton Hershey in the United States.

Chocolate continues to be the world’s most popular sweet. Europeans account for more than 50% of chocolate consumption, and the United States spends more than $14-billion on cocoa products annually. The cacao used is harvested primarily from Africa and Southeast Asia. Increased global temperatures and decreased rainfall may someday threaten chocolate production. Farmers and genetic scientists are working to find approaches that will stave off decline. Make sure to spend a little extra time appreciating this incredible plant during your next trip to the Conservatory!